Former prosecutor turned hotshot defense attorney, Jackie DelRay, is a star in the shark-infested judicial waters of Washington, DC. Behind her take-no-prisoners façade, she hides a painful secret, and a longing for FBI Special Agent Beckett Pearson—the man who captured her heart during a passion-filled weekend in college. The same man who still holds a grudge over a case Jackie refused to prosecute several years ago. When Beck is arrested for the shocking murder of the FBI director’s estranged wife, Jackie breaks every rule about being emotionally involved with her client – knowing the risks to her heart and her career – and rushes to defend him.

Former model and football star, Beck has finally found his home with the Bureau. He wants nothing to do with the sexy lawyer who left him without a goodbye twelve years ago and then destroyed his first, and most important, missing persons investigation. Now, with his freedom on the line, Jackie’s brilliant legal mind may be his one hope at staying out of prison.

When their investigation is mired by political alliances and reckless greed, Beck and Jackie battle corruption at the highest levels. That battle includes resisting the long-buried passion they shared twelve years ago, but will a killer bent on stopping their investigation give them a fight they are bound to lose? 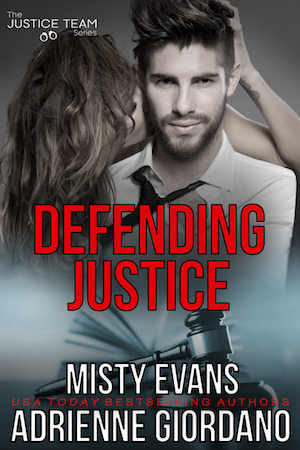