Hard-driving attorney Jo Pomeroy is as determined as she is sexy—in other words, a major pain in NYPD Sergeant Gabe Townsend’s butt. Working together on a high-profile task force charged with busting sales of counterfeit goods has been rocky from the start. And Jo’s penchant for trouble is as difficult to ignore as her spectacular legs.

The world of knock-offs isn’t as frivolous as it appears. The purses are fake, but the danger is all too real—and Jo seems hell-bent on putting herself in the middle of it. Her investigations have uncovered valuable leads for Gabe’s team, but they’ve also drawn the wrong kind of attention. Now, she’s on the radar of a mysterious smuggler not afraid to use violence to evade the law. At the risk of their lives—and their hearts—Gabe and Jo must find him before he finds them.

His role on an anti-counterfeiting task force earned NYPD Sergeant Gabe Townsend the catch of a lifetime—tough as nails but sexy as hell Jo Pomeroy. The woman has a body that drives him wild and a way of attracting danger that’s making him crazy. And her relentless pursuit of an elusive criminal has his protective instincts in overdrive.

Jo didn’t get to be a hotshot attorney by giving up easily. Her high-end clients count on her to keep knockoffs of their luxury goods off the streets. Distractions are the last thing she needs. Especially six-foot-three, hard body calendar-worthy distractions.

She failed once, letting a smuggler slip through her grasp. Next time, he’ll have nowhere to run. A lead takes Jo and Gabe to a small town where not everything—or anyone—is as innocent as it seems. Making this bust could be the biggest break of her career…but at what risk to her newfound love?

Sun, fun, and Jo Pomeroy, the sexiest, most-driven attorney around, await NYPD Sergeant Gabe Townsend in Los Angeles. A trip to the West Coast is the perfect vacation—he won’t have to hide his relationship with Jo from the New York anti-counterfeiting task force, and he can finally enjoy some overdue time-off with the woman of his dreams.

Jo makes undercover deals for fake merchandise, but her feelings for Gabe are all too real. Unfortunately, she isn’t the one on vacation, and while she can’t wait to get her heartthrob alone, she also can’t say no when the mayor of Los Angeles asks for her help in ridding the city of illegal knockoffs.

Being too dedicated for her own good backfires when Jo ends up on a killer’s hit list. Gabe wants Jo to back down; she’s not about to. As the danger escalates, so do their feelings for each other. All Jo’s ever wanted is to expand her task force nationwide. Now, with her life on the line, Jo must decide if heading the taskforce is worth sacrificing it all, including a future with the man she loves. 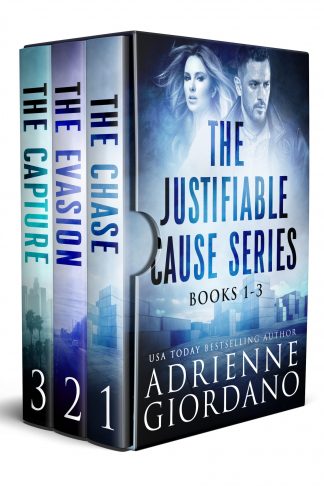