Being stuck in the old neighborhood is the last thing reluctant mob princess Lucie Rizzo wants. With her new business on the verge of success—bada bing!—she’s ready to go from unemployed to entrepreneur. Lucie’s determined to make a name for herself. One not tarnished by her dad’s mobster rep.

So when an art deal she brokered between clients turns suspicious, it’s up to Lucie to uncover the truth. She might not know the difference between Monet and Manet, but Rizzos are no strangers to jail time—and Lucie refuses to be someone’s prison bitch.

Unless that someone is a tall, blond and Irish cop. Detective Tim O’Brien might be on the wrong side of the law by Rizzo standards, but everything about him is oh-so-right. He’s not shy about making Lucie feel wanted, mafia ties and all. Even joining her crack—or crackpot—team on the trail of two paintings with equally shady origins. 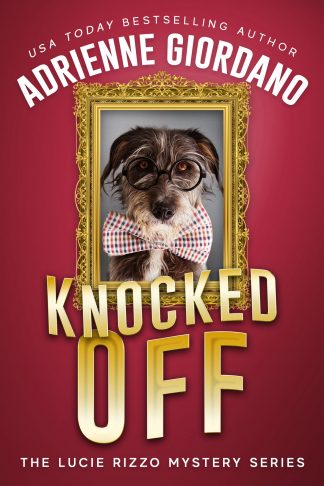