Out of work and down on her luck, Lucie Rizzo is forced to do the one thing she’s long avoided—come home to her nutty, mob-infested family. A move that brings her back into the tempting arms of Frankie Falcone, the smoldering Italian ex who’s no stranger to living with the mob.

When Lucie parlays her temporary dog-walking gig into a legit career, Frankie becomes her number one supporter. Suddenly, shaking her mob princess reputation doesn’t seem so crazy…until three of her clients are dogjacked.

Despite help from the on-again, off-again Mr. Fix-It in her life, Lucie is thrown into a criminal conspiracy straight out of a gangster movie. One that, if she’s not careful, could leave her sleeping with the fishes.

Being stuck in the old neighborhood is the last thing reluctant mob princess Lucie Rizzo wants. With her new business on the verge of success—bada bing!—she’s ready to go from unemployed to entrepreneur. Lucie’s determined to make a name for herself. One not tarnished by her dad’s mobster rep.

So when an art deal she brokered between clients turns suspicious, it’s up to Lucie to uncover the truth. She might not know the difference between Monet and Manet, but Rizzos are no strangers to jail time—and Lucie refuses to be someone’s prison bitch.

Unless that someone is a tall, blond and Irish cop. Detective Tim O’Brien might be on the wrong side of the law by Rizzo standards, but everything about him is oh-so-right. He’s not shy about making Lucie feel wanted, mafia ties and all. Even joining her crack—or crackpot—team on the trail of two paintings with equally shady origins.

Lucie Rizzo’s life is…complicated. She’s worked hard to grow a legit business and leave behind the mob princess reputation. Now her mobster father is on parole, making things awkward at home—especially with her detective boyfriend. And thanks to an inescapable penchant for trouble, Lucie keeps stumbling into the wrong crime at the wrong time.

But what could go wrong at a dog show? It’s the perfect venue for Lucie to score visibility for her brand—and some quality time with sexy Irish cop, Tim O’Brien. Until her favorite client is snatched by a mystery woman. This broad messed with the wrong hot-blooded family! No one steals from a Rizzo, and Lucie and her zany sidekicks will do anything to take back what’s theirs.

Mob princess turned entrepreneur Lucie Rizzo knows that when you hit rock bottom, the only way to go is up. Despite her family’s unshakable criminal reputation, Lucie’s new business is booming. And for once her love life isn’t far behind.

Lucie devotes her days to building the Coco Barknell brand, but her nights are all about roguishly sexy Tim O’Brien. At least they will be if she and Detective O’Hottie finally take their relationship to the next level. But bring an Irish cop home to her mobster father? Fuggetaboutit.

Then Lucie’s knack for finding trouble lands her in hot water—and the six o’clock news. Someone’s absconded with a million-dollar piece of cinematic costume history, with Lucie the only witness to the crime. Not to mention the prime suspect. To clear her name, she’ll need an assist from her entire wacky crew: friends, family…and future (hopefully) lover. 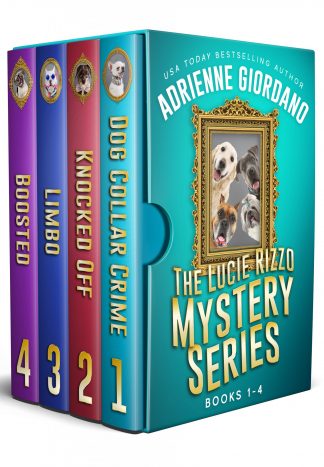