As the wisest of wiseguys will tell you, to go big, you have to start small.

A local charity fashion show provides the perfect chance to shine the spotlight on Coco Barknell. And the opportunity to work with the Don Corleone of pet products, Buzzy Sneider.

But Buzzy didn’t earn that rank by being nice. When Lucie’s Coco Barknell designs start appearing on Buzzy’s website, Lucie wants to wring her thieving neck.
Until somebody beats her to it.

A dead celebrity plus a very public feud can only add up to trouble for a girl named Rizzo. Except it’s not Lucie the cops put behind bars, but her BFF—hotheaded creative diva, Roseanne. The evidence may be stacked against Ro, but Lucie and her zany crew will never let her go down without a fight!

Big business might be ruthless, but Lucie Rizzo learned to take the heat from the best: her mob boss father. Except instead of cooking the books, she’s mixing up her next moneymaking expansion. But her BFF-turned-partner isn’t sold on the idea. Ro is the creative genius—not to mention the boobs—of their operation, but Lucie has the discerning business palate. And this venture smells like sweet success. All they need is the right investor.

French chef Antoine Durand made casseroles sexy again. His closely guarded secret recipe built a billion-dollar empire. He’s got the cred and the cash to turn Lucie’s dream into a reality. She gives him a taste of her proposal and Antoine’s about to bite, when a fire breaks out in his restaurant. And in the chaos, his priceless recipe is stolen.

The number one suspect? Lucie. Because a girl can’t shake her criminal connections in this town. She might be a mob princess, but she’s no thief. And she’s certainly no blackmailer. Someone has beef with the chef. The Rizzo crew needs to find out who, before Antoine puts Coco Barknell out of business…and Lucie behind bars.

Building a business empire is hard work, even without her family’s notoriety. Staying out of trouble isn’t exactly her forte. Still, Lucie could use a vacation from Chicago winters and the town where everybody knows her father’s name.
So when a certain Irish cop promises warmer days—and hotter nights—
Lucie sees an offer she can’t refuse.

Detective O’Hottie sweeps her away to the land of sun, sand, and…retirees? Before the real romantic getaway begins, Tim wants to visit his Uncle Henry. Or, to be exact, Tim’s mom wants the goods on Henry’s new girlfriend.

But what could a sweet, 50-something woman be hiding? Not a lot, judging by the amount of cleavage on display. It’s more than just the skintight leopard print making Tim do a double-take. The details don’t add up. Mattie’s not being completely honest—and Lucie smells a rat.

Uncle Henry’s gal pal isn’t who she claims to be.

But is Mattie playing a long con, or is she the victim?

Either way, Lucie is getting caught in a dangerous game. 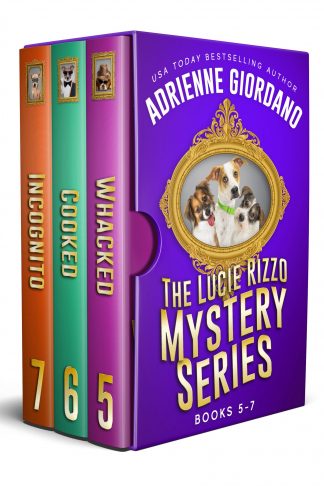